Spider Monkeys and White Faced Monkeys amuse our guests and themselves as they climb and swing through the trees of our Monkey Pass. Above, below, and beside you they will delight you with their antics. All of these monkeys were donated to us by the MINAE, the Costa Rican Ministry of Wildlife and were confiscated from people who held them illegally. In many cases the animals were abused and in near death condition when we received them. We have rehabilitated them and combined them into sociable groups where they have become families.

Everyone wants to see monkeys when they visit Costa Rica but we have the best natural habitats in which to observe and photograph them. Our educational signage provides insight into the behaviors, reproduction and future survival of these monkeys in Costa Rica. 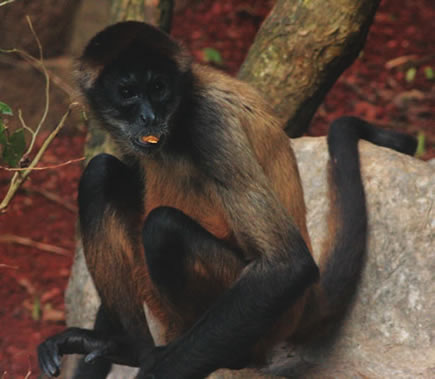 The Black-handed Spider Monkey is listed as a vulnerable species and population estimates from Biologist Ronald Sanchez at the University of Costa Rica show a 72% decline in their population over 12 years from 26,000 individuals in 1995 to 7,225 individuals in 2007. This species is very susceptible to human interference in its environment and because females reproduce on average only every three years it is difficult for groups to recuperate quickly from adverse environmental effects. As populations decline the possibility for inbreeding increases with the potential to cause genetic deficiencies in the species.

The prehensile tail of the spider monkey is muscularly adapted for controlled grasping or wrapping around branches like a third arm. The tail of this species is one of the strongest in the animal kingdom and can support more than its entire body weight. Their thumb less hands act as hooks for grasping and swinging agilely from branch to branch and for pulling fruit-laden branches to their mouths.

Their name originates from their extra long arms and legs that look like spiders’ legs. The females have a large pendulum like clitoris that could be mistaken for a male’s penis. This species occasionally associates in the wild with the White-throated Capuchin monkey. 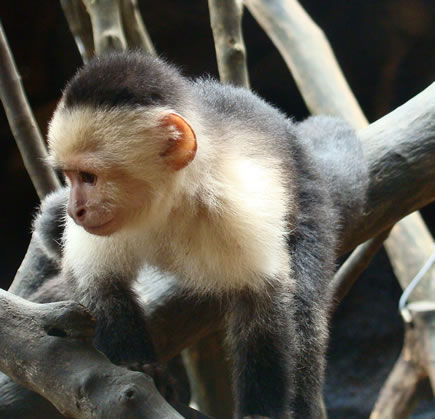 The name “Capuchin” originates from the similarity between the head coloration of these monkeys and the hoods worn by the Spanish order of Capuchin Monks..

They have a long prehensile tail that is the same length of its body.

They are among the most intelligent primates demonstrated by their ability to use tools in the search for food (Cambridge University). The only other primates to use tools are chimpanzees and orangutans.