The best place to see frogs in Costa Rica is our free range Ranarium or frog exhibit where the frogs roam freely throughout our landscaped enclosure. Because you are not looking at them through glass it is the perfect environment for taking photos of the frogs. Our educational signage and our knowledgeable guides are able to impart extensive information about the frogs in Costa Rica.

Below are some of the frogs from Costa Rica you will find in our Ranarium:

Information About Leaf-Frogs of Costa Rica 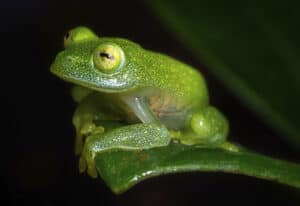 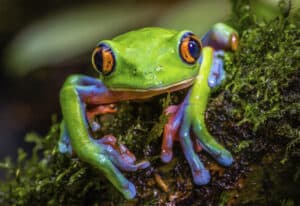 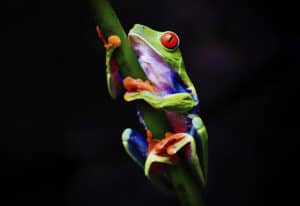 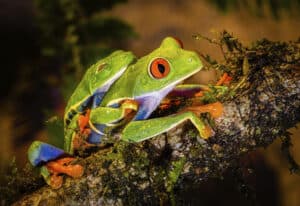 There are perhaps no forest creatures more splendid and beautiful in their colorful innocence than the Leaf-frogs of Costa Rica. They have been promoted and marketed as the mascot of the tropical rainforest and reflect what we consider to be the pure and natural essence of Costa Rica.

There are 6 species of Leaf-frogs from the subfamily Phyllomedusinae existing in Costa Rica, with one species, the Blue Sided Leaf Frog, found only in Costa Rica. Members of this subfamily can be easily differentiated from other frogs by their vertically elliptical pupils.

Leaf-frogs are primarily arboreal and nocturnal meaning they live in trees and are active at night. To help them adhere to the many surfaces of trees the frogs have evolved specialized sticky discs on the tips of their fingers and toes.

During periods of activity the eye color and skin tones of these frogs may change color and differ significantly from their color tones while at rest. They also significantly change in color as they mature from juveniles to adults.

During the rainy season Leaf-frogs demonstrate the typical courtship ritual of attracting mates to a breeding area through vocalization and then engaging in the amplexus position where the smaller male frog mounts the female from behind and clasps her under the arms. These frogs generally lay their eggs on vegetation overhanging water so that the tadpoles drop into the water in 5-7 days when they hatch. After hatching the tadpoles will feed on aquatic vegetation and spend on average 2-3 months undergoing metamorphosis into a juvenile frog.

In order to observe these creatures in their natural habitat researchers must track them at night in the forest by triangulating their vocalizations during mating season. Because it is very difficult to find them during nonbreeding seasons little is known about the rest of their life, including how they survive during the dry season, and their growth from juvenile to adult.

Information about the Poison Dart Frogs of Costa Rica 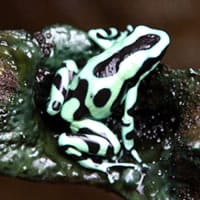 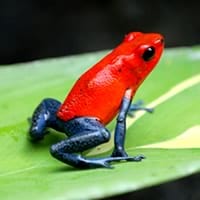 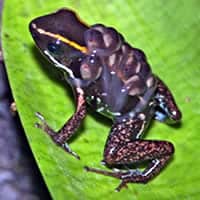 Frogs and toads, in all stages of their lifecycle, form an important part of the diet of many other animals. Their diverse predators include spiders, birds, mammals, lizards and especially snakes. There are many snakes that eat only frogs. As a defensive response the Dendrobatidae family has evolved a unique strategy, principally related to their venom and color that functions as a very effective anti-predatory mechanism.

There are about 190 species of frogs comprising the family Dendrobatidae and living in the rain forests of tropical Central and South America. These amphibians are distinctive owing to their small size (being no larger than 2 inches or 5cm), the majority for their brilliant and beautiful colors, and because some species possess specialized glands in the skin that produce some of the most toxic substances known in the animal kingdom.

Since ancient times, the poison of some species of these frogs has been used by South American Indians to coat the tips of their arrows and blow darts in order to more quickly kill their prey. They would heat the frogs over a small fire in order to intensify the frog’s production of venom. The name “Poison Dart Frog” originated from this practice.

In Costa Rica there are 8 species of poison frogs, distributed at elevations of less than 3,900 ft. (1,200 m) along the entire Caribbean drainage and in the southern Pacific region. These frogs live on the forest floor and are diurnal (active during the day). They eat various species of ants, termites and other small insects. The venom of the Costa Rican species can only severely affect humans by entering the bloodstream, nasal passages, eyes or the mouth. Symptoms range from nose and eye irritations to nausea, and irregular heartbeat. The more venomous South American species can cause cardiac failure. The long term effects of these specialized neurotoxins are still not completely understood and these frogs should never be handled except by experts.

The toxicity of the venom is related to the frog’s natural diet of certain species of ants. In captivity the frogs quickly lose their venom due to the absence of these ants in their diet.

Their reproduction is an elaborate event with courtship that includes male vocalizations to attract the female and combat among males. The female deposits a small number of eggs in a humid site where they are fertilized by the male. In 5-10 days when tadpoles emerge from the eggs, the adults carry them on their backs to a bromeliad containing water where they complete their development in about 2 months. During this time the females return periodically to deposit infertile eggs which serve as food for the tadpoles.