Survival Status: The Jaguar is listed as “Near Threatened” on the IUCN list and its numbers in the wild are declining more from habitat loss, genetic fragmentation and conflict with ranchers than from illegal poaching for its fur. The viability of the current population near Tucson in the U.S. is threatened by the building of the U.S.- Mexico border fence that will eliminate cross breeding between the U.S. and Mexico populations. The existing populations are most stable in the larger reserves scattered through Mexico, Central America and South America.

The Jaguar is the third largest cat on the planet behind the Tiger and Lion and it is the largest and most powerful feline in the Western Hemisphere. This spotted cat most closely resembles the leopard but is much heavier, sturdier and more powerful than the leopard, and its behavior is more similar to a tiger. Its short and stocky limb structure allows for adept climbing, crawling and swimming ability. It almost always lives close to a water source such as a swamp, lake or river . Like the other large cats of the world it has the vocal capability to roar unlike its smaller American cousins.

DNA evidence suggests that the lion, tiger, leopard, jaguar, snow leopard, and clouded leopard share a common genetic lineage that diverged from 6-10 million years ago. The Jaguar is the only member of this line existing today in the Western Hemisphere and did not appear in its final form and size until about 500,000 years ago.

There are significant size variations among the subspecies and the farther south the subspecies is found the larger they tend to be, climaxing with the largest animals (up to 350 lbs or 160 kg) in the open wetland basin of Brasil’s Pantanal. This is probably due to the larger size of the prey in these open wetlands versus the smaller size of dense forest prey. Average weights considering all subspecies range from 125-210 lbs. (56-96 kg), however, one individual can weigh as little as 65 lbs. (30 kg) and another as much as 350 lbs. (160 kg). Females are typically 10-20% smaller than the males.

In about 6% of the species inhabiting South America there exists a genetic allele for “Melanism” which causes the carrier to have an all black coat but with spots still barely visible because they are a slightly darker black. These animals are called “Black Panthers” but in reality they are simply Jaguars with this genetic color mutation. The female black Jaguar mating with a normal Jaguar has a very high chance to pass on this mutation. In very rare cases there have also been all white (Albino) Jaguars called “White Panthers”. Jaguars that live in dense primary forest have a significantly darker color pattern than those that live in more open habitats as natural selection dictates the perfect camouflage.

The name “Jaguar” is a Portuguese variation of a word from the language of the Tupi Indians of Brazil. The word they use to describe the Jaguar is “the cat that kills with the first leap”. The Jaguar is a preeminent figure in all of the Native American tribes from Arizona south to the Amazon Basin and most notably including the civilizations of the Maya and the Aztec who thought of this animal as a link between the” Living” and “Spiritual” world.

Jaguars are not known to be “Man-Eaters” and there are significantly fewer human attacks by Jaguars than by tigers or lions. These normally occur only when the animal is too old or injured to compete for its normal prey. However, these animals are very unpredictable and most zookeepers maintain their distance because they cannot be trusted. You will rarely find them in a circus or show because of this unpredictable behavior.

There are theories that suggest that the smaller size of the Tropical Puma is due to competition with Jaguar. When the two occupy the same range the Puma must look to smaller prey and through natural selection became smaller over thousands of years.

According to reports there exists a breeding population of Jaguars as far north as Arizona (southeast of Tucson) in the U.S. and their range extends south through Mexico, Central America to Paraguay and northern Argentina. There have also been a few sightings in New Mexico and Texas in the U.S. In the early 1900’s their range extended as far north as the Grand Canyon and as far west as Southern California. According to fossil records, over the past 40,000 years the range of the Jaguar has receded 620 miles (1,000 km) southward (from most of the southern half of the U.S.) and 1,250 miles (2,000 km) northward in South America. These cats can be found as high as 3,800 meters in altitude.

The jaguar is an “Apex” predator meaning that it exists at the very top of the food chain and it plays a strong role in stabilizing and regulating the populations of prey species. Like most other large cats the Jaguar employs a stalk and ambush style of hunting and always attacks from cover and from the prey’s blind spot. It patrols its territory in the forest using its keen hearing, eyesight and sense of smell to detect prey. Jaguars are thought to have a more acute sense of smell than the other American cats which depend more on hearing and eyesight. Although considered nocturnal its peak hunting times are at dawn and dusk and unlike the other big cats the more energetic Jaguar will stay active for as much as 60% of its time awake.

Because of its exceptionally powerful bite, even relative to other big cats, the Jaguar employs a unique killing method. It attacks the head of the prey species and bites through the skull piercing the brain with its canine teeth. This is its preferred killing method but it will also use the deep-throat bite-and-suffocation technique typical of big cats. Another distinct advantage of these powerful jaws is their ability to pierce the shells of armored reptiles like armadillos, turtles and caimans. In some areas these prey species are the number one food resource.

The strength of its jaws also aids the Jaguar in dragging dead prey out of the water and up trees or steep terrain. Jaguars have been reported to drag prey weighing 600 lbs through dense jungle.

The Jaguar is an opportunistic hunter and has the most diverse diet of any of the large carnivores. This is due to the smaller number of large herbivores found in the rainforest than in open grassland. It has been found to consume up to 87 species of prey including deer, capybara, tapirs, peccaries (wild pigs), dogs, foxes, snakes, caimans, crocodiles, turtles, armadillos, birds, fish, sloths, monkeys, eggs and frogs. It prefers livestock and horses to its natural diet if they are available, and this, of course, has caused major conflict with ranchers who shoot them on site.

Jaguars are solitary creatures and do not interact with each other except during courtship. The female provides all of the parenting and will avoid the male at all costs during the infancy of the cubs for fear of the male killing the cubs. Males occupy a territory that includes 1-3 female territories inside this territory. He actually defends the territory not necessarily the females within the territory as females have been known to leave one males territory temporarily to mate with another male and the male does not seem to mind, but he very much minds any physical intrusion by another male into his territory.

Female Jaguars reach sexual maturity at 2 years of age and males at 2.5 to 3 years of age. This species will breed throughout the year and births per year will increase when prey is plentiful. Females are in heat for 6-17 days out of a full 37 day cycle and females will advertise their fertility with urine, scent marks and increased vocalizations. The gestation period lasts 93-105 days after which 1- 4 but most commonly two cubs are born. The cubs are born blind and will not open their eyes for two weeks, and they will be weaned from their mother’s milk at 3 months. By six months they will leave the den and begin to accompany their mother on hunts. They will stay with their mother from one to two years before they leave to claim their own territory.

The average lifespan in the wild is 12-15 years but in captivity it is 20 plus years with a few individuals surpassing 23 years. This puts them among the longest-lived felines on the planet and they can continue to reproduce up until their death.

Future Survival in the Wild:

The Jaguar was extremely hard hit by the fur trade in the 1960’s when an average of 15,000 jaguar skins left the Amazon region every year. The Convention on International Trade in Endangered Species (CITES) of 1973 brought about a sharp decline in the trade of its skins but by this time the animal had lost 37% of its historic range and its status was unknown in 18% more of that range. It is still not protected from trophy hunting in Bolivia, Ecuador or Guyana. However, the concept most likely to save the Jaguar is the growth in ecotourism and the education of ranchers on the value of this species and related species to them in the future.

Without a doubt the population of Jaguars in the U.S. will not remain viable with the construction of the U.S. – Mexico Border Fence and this problem of “Fragmentation” is an inherent problem with any species that requires large territories. Hopefully, the introduction of “Biological Corridors” which connect protected reserves to each other will aid in maintaining healthy gene pools within these reserves.

Male jaguars require territories vary between 30 and 40 square miles (75-100 km2) depending upon the availability of prey. There are normally 2 to 3 female territories which overlap the male’s territory. In order to maintain a healthy population you need 250 males so you need an interconnected area of at least 7,200 square miles (18,750 km2)

In 70% of its current range scientists feel relatively certain that successful populations can be maintained. 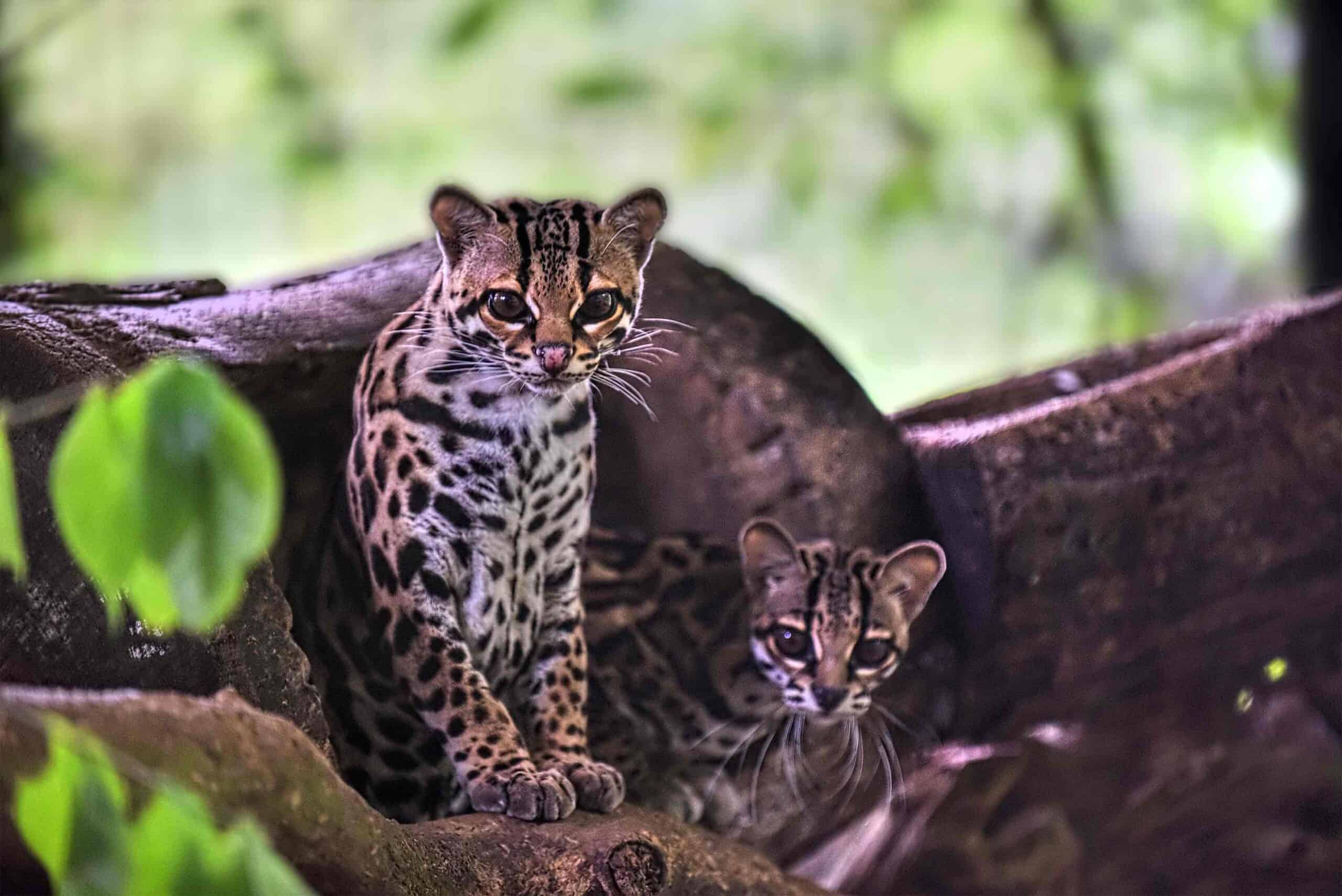 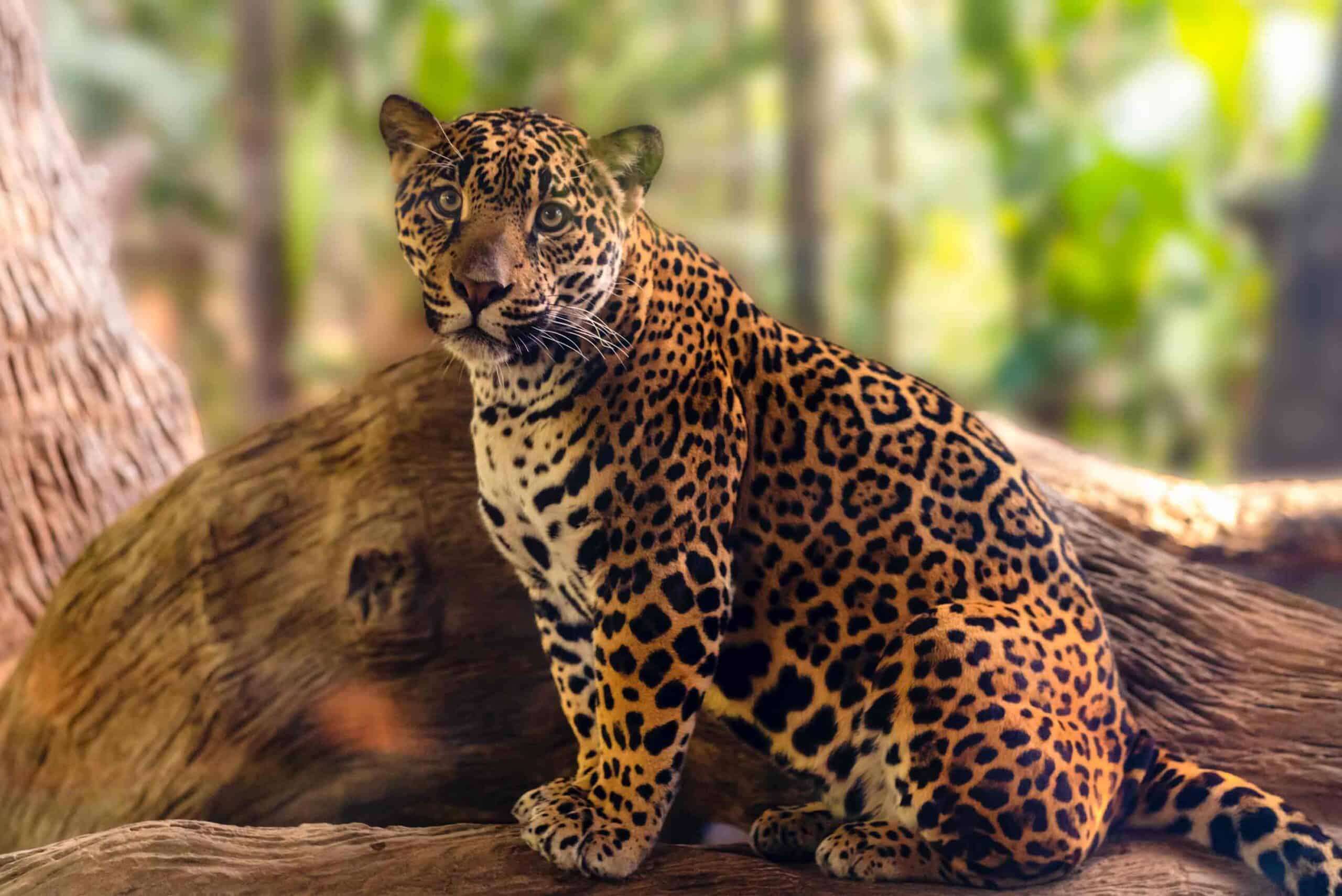 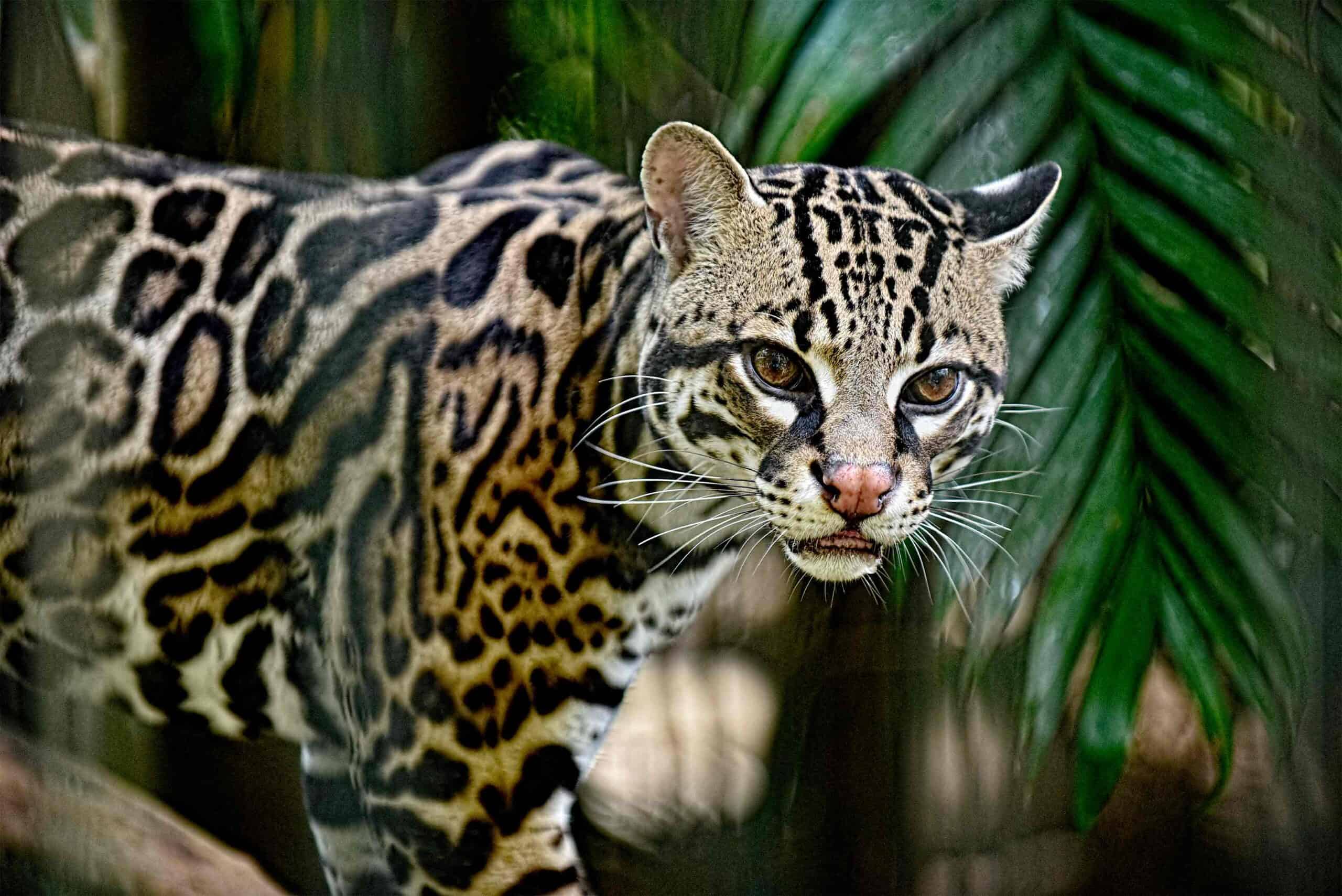 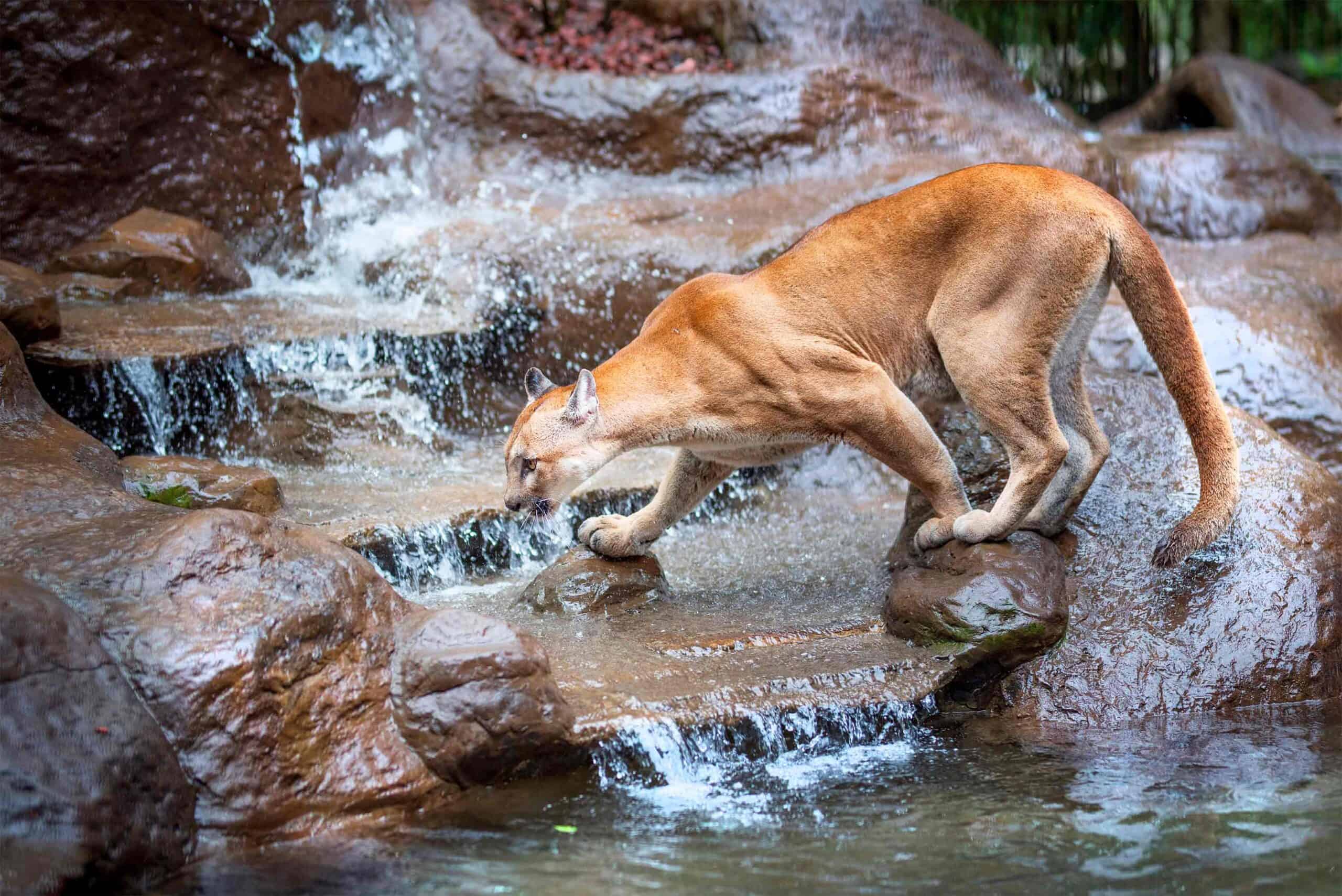